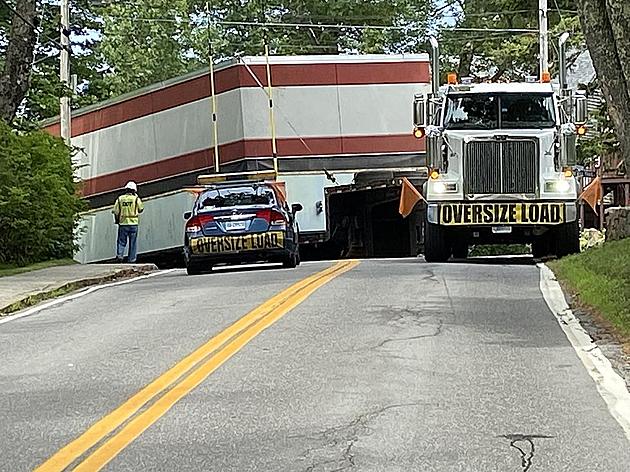 Superload driver Mike Saxton recently had an experience he will never forget. Typically a move of this size and weight travel with police and escort cars leading to surrounding passenger cars that get affected by slow speeds and longer travel time. This results passenger car drivers often being angry towards the truck driver who is only focused on getting the load delivered safely. This experience was quite the opposite…

Mike recently delivered a prefabricated MRI building to a hospital in Bar Harbor, ME. The route that was secured for this 60’1ft long, 15ft wide, 12’4ft tall and 120,000 pound building had no room for error and developed some challenges along the way. Being an experienced driver who always has a cool head Mike worked through these obstacles as a true professional to arrive at the final destination after being on the road for roughly 2 weeks.

When the load was closer to delivery something different happened, the angry passenger cars turned into people supporting Mike and rooting him and his efforts on. As Mike entered the island of Bar Harbor, ME. the local community began to track his progress on a local facebook group and even the local news was following the story of the large MRI building that would be of great use to the people who live on the island of Bar Harbor. Mike became a hero to them as it was something the community rallied behind.

Once delivered the hospital received its new MRI station they decided to treat Mike by putting him up in an oceanside hotel room and treating him to lobster dinner and drinks all covered by the hospital. This was special but what happened next was even more shocking. A community member started a Go Fund Me to raise money for Mike so that he would be able to take a proper vacation on the island of Bar Harbor, that Go Fund Me is currently at $2,450! 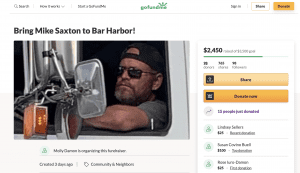 We love to see this kind of support for any driver but especially a top T-U driver. This community response turned Mike into a local super hero and are excited to see if we will be returning to Bar Harbor for some quality downtime. To see photos of this move posted by a local radio station follow the link below. 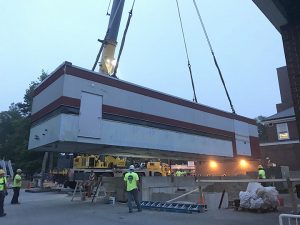 MRI unit at delivery being dropped into place.